The COVID-19 pandemic has delivered a triple shock to developing East Asia and the Pacific (EAP), and according to the World Bank's latest data, growth in the region declined to 1.2% in 2020. The relatively positive performance of the EAP region was driven primarily by China which grew by 2.3%. Of the other countries in the region, only Vietnam, Nauru, and Lao PDR grew in 2020. Prospects for the region are mixed: only China and Vietnam are expected to grow strongly in 2021, by 8.1% and 6.6% respectively, while the rest of the region is expected to grow by only 4.4%.

According to UNCTAD, FDI in East Asia grew 12% to $283 billion in 2020, while in Southeast Asia, FDI contracted by 31% to $107 billion due to a decline in investment to the largest recipients including Indonesia, Vietnam, and Malaysia. South Asia saw FDI rising by 10% to $65 billion: FDI rose by 13% in India, remained unchanged in Pakistan, and fell in other economies in the region. 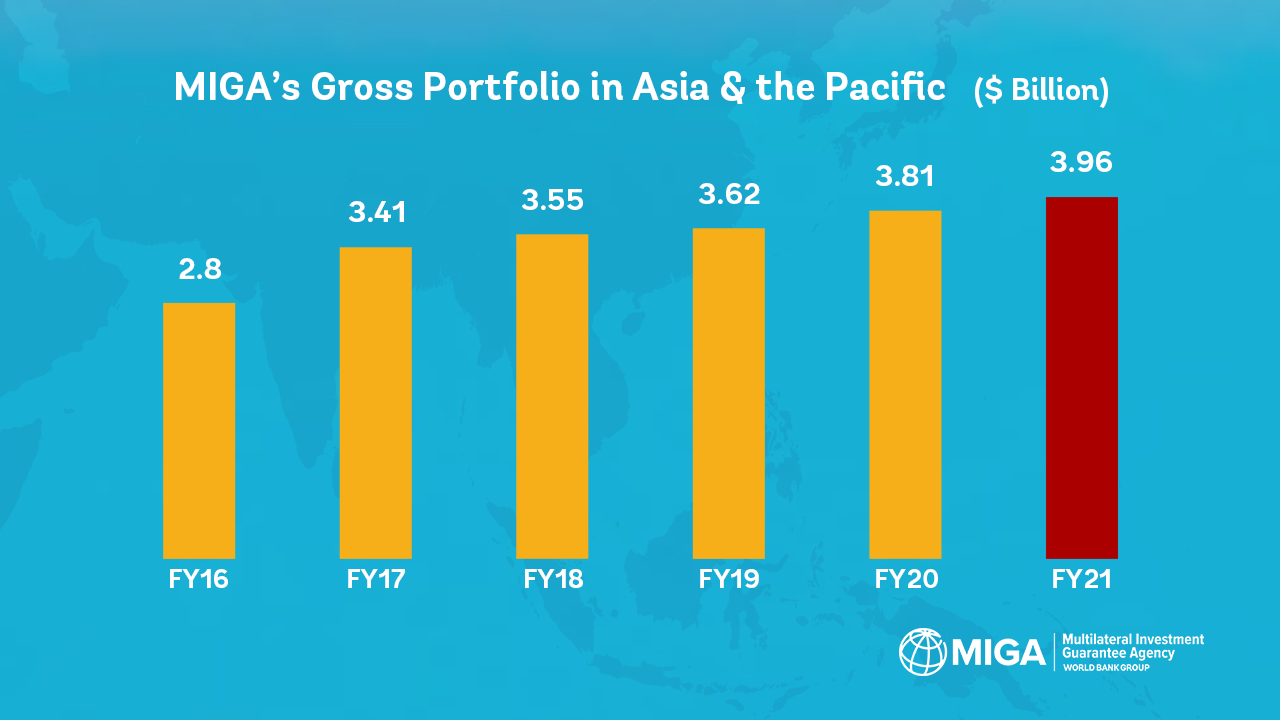 In FY21, MIGA supported two projects in the region and issued $522.7 million in guarantees, accounting for 10% of the total issuance in this fiscal year.

In FY20, MIGA supported a hydropower plant project in the Solomon Islands and an electric transmission line project in Cambodia, issuing $88.1 million in total in the EAP region. Additionally, both these projects represented the first guarantees issued by the Agency in the two countries. For South Asia, MIGA issued guarantees for $444.2 million to support two projects. The first project was a Political Risk Insurance (PRI) guarantee for $87.4 million in relation to a hydropower project in Nepal; the second project was a Non-Honoring of Financial Obligations (NHFO) guarantee for $356.8 million in relation to a fertilizer production facility in Bangladesh. 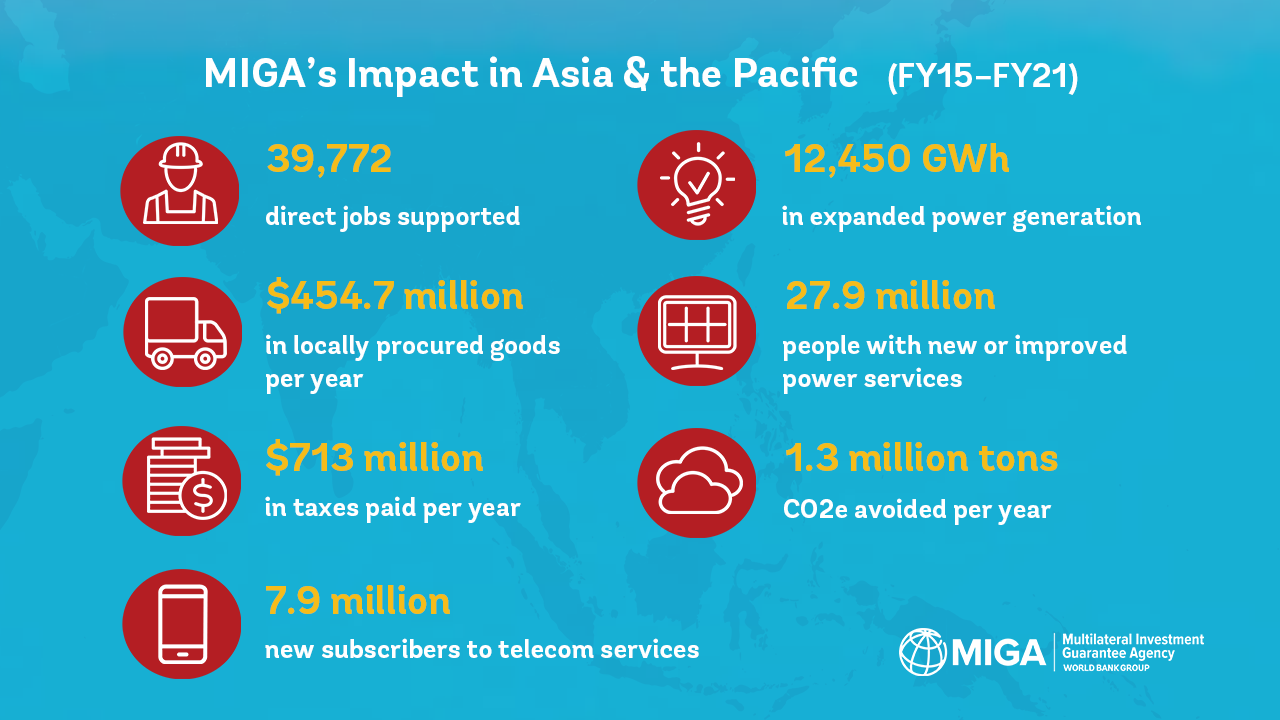 EXAMPLES OF MIGA-SUPPORTED PROJECTS IN ASIA AND THE PACIFIC

In April 2020, MIGA issued guarantees that will support the refinancing of existing power transmission infrastructure in Cambodia’s capital, Phnom Penh, and its surroundings. Issued to Mizuho Bank Ltd. of Japan (Mizuho) and ING Bank N.V. of the Netherlands through its Singapore Branch (ING), the guarantees amount to US$76 million and cover up the lenders’ loans for up to 10 years. The guarantees will provide protection against Currency Inconvertibility and Transfer Restriction, Expropriation, Breach of Contract, and War and Civil Disturbance.

The project, implemented and operated by Cambodian Transmission Limited (CTL), consists of a 230KV transmission network that connects the Phnom Penh region with power generators in the east and northeast of the country. The network also provides an interconnection to the Cambodia-Vietnam and Cambodia-Thailand borders in the south and northwest of the country respectively. 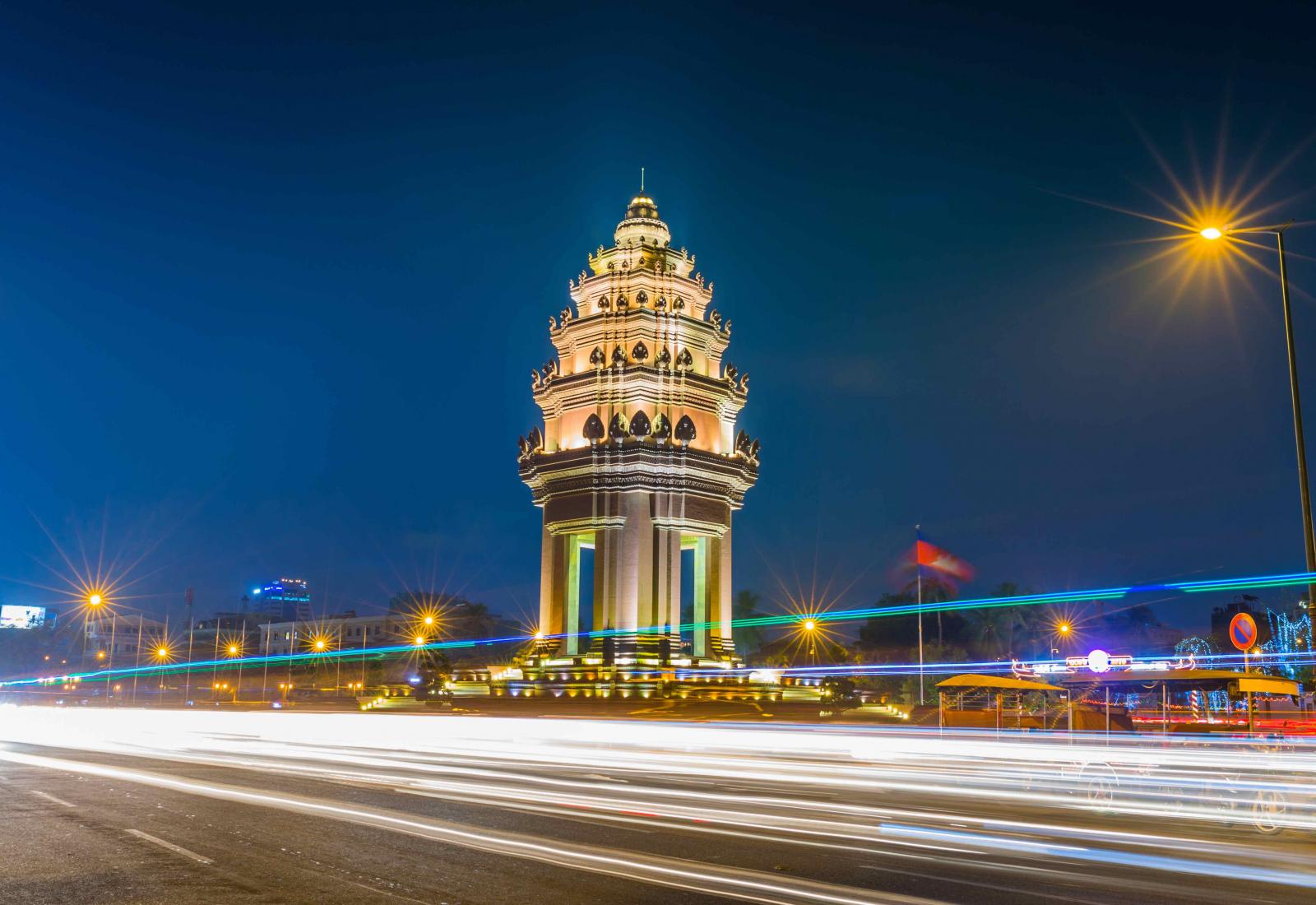 In a time of crisis, transmission lines in Cambodia deliver electricity—and commercial financing.

In March 2020, MIGA issued guarantees that will support the development, financing, construction, operation, and maintenance of the Tina River Hydropower Development Project in the Solomon Islands. The guarantees, issued to Korea Water Resources Corporation and Hyundai Engineering Co., Ltd. and amounting to US$14.094 million, cover 90% of the equity investments and future earnings in the Project for up to 20 years through Tina Hydropower Limited. These guarantees provide protections against Currency Inconvertibility and Transfer Restriction, Expropriation, Breach of Contract, and War and Civil Disturbance.

When operational, the Project is expected to reduce retail electricity tariffs without increasing greenhouse gas emissions. The Project will also generate significant economic flows into the country by displacing diesel generation, resulting in a reduction of 1.3 million tons of carbon dioxide equivalent over the life of the Project. 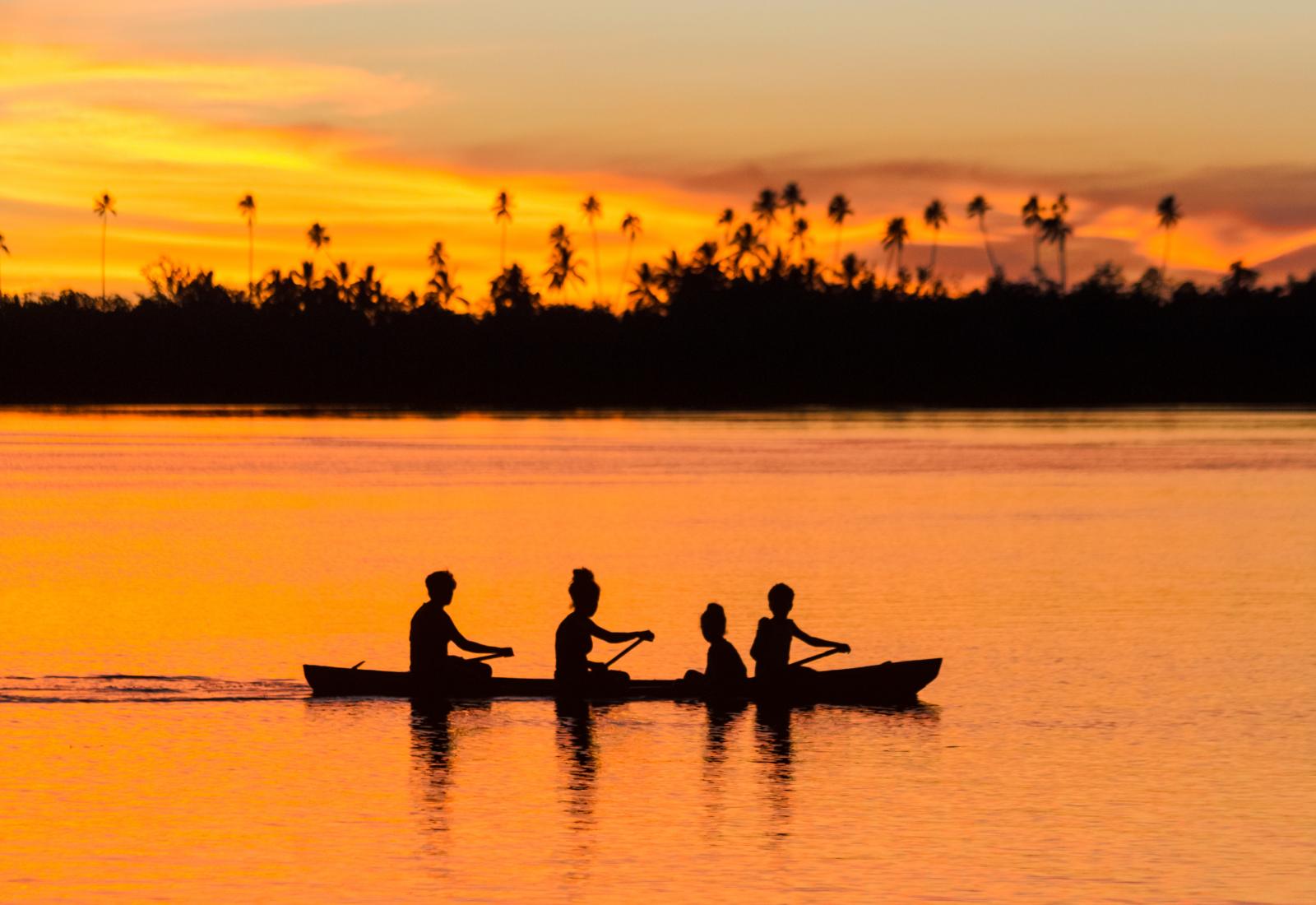 To the adventurous traveler, the archipelago nation of Solomon Islands looks like heaven. But to an international investor, things look more precarious.

Since 2011, MIGA has supported a number of projects in Indonesia and helped the country improve its telecommunications infrastructure and produce clean energy. This has resulted in 11,960 direct jobs being created, $144.04 million generated annually in taxes and fees, $336.38 million worth of locally procured goods annually, 181 GWh of power generated annually, 110,330 people with access to power, and 16.6 million extra mobile phone users.

MIGA is delighted to recognize Audra Low, Chief Executive Officer and Executive Director of Clifford Capital, as the 2021 recipient of its Gender Leadership Award. Ms. Low has shown her commitment to furthering gender equality in the workplace, particularly in front line roles and functions where women’s representation has historically been lacking. Her efforts set an example for women in the finance sector, who have been significantly underrepresented in executive positions, representing less than 2% of bank CEOs and holding less than 20% of board seats of banks worldwide.

In May 2019, MIGA and the Asian Development Bank agreed to cooperate more closely to increase the flow of private sector investment into emerging economies in Asia and the Pacific, in line with the 2030 development goals. The two institutions signed a Cooperation Agreement that envisages greater use of the institutions’ respective financial products in joint projects. 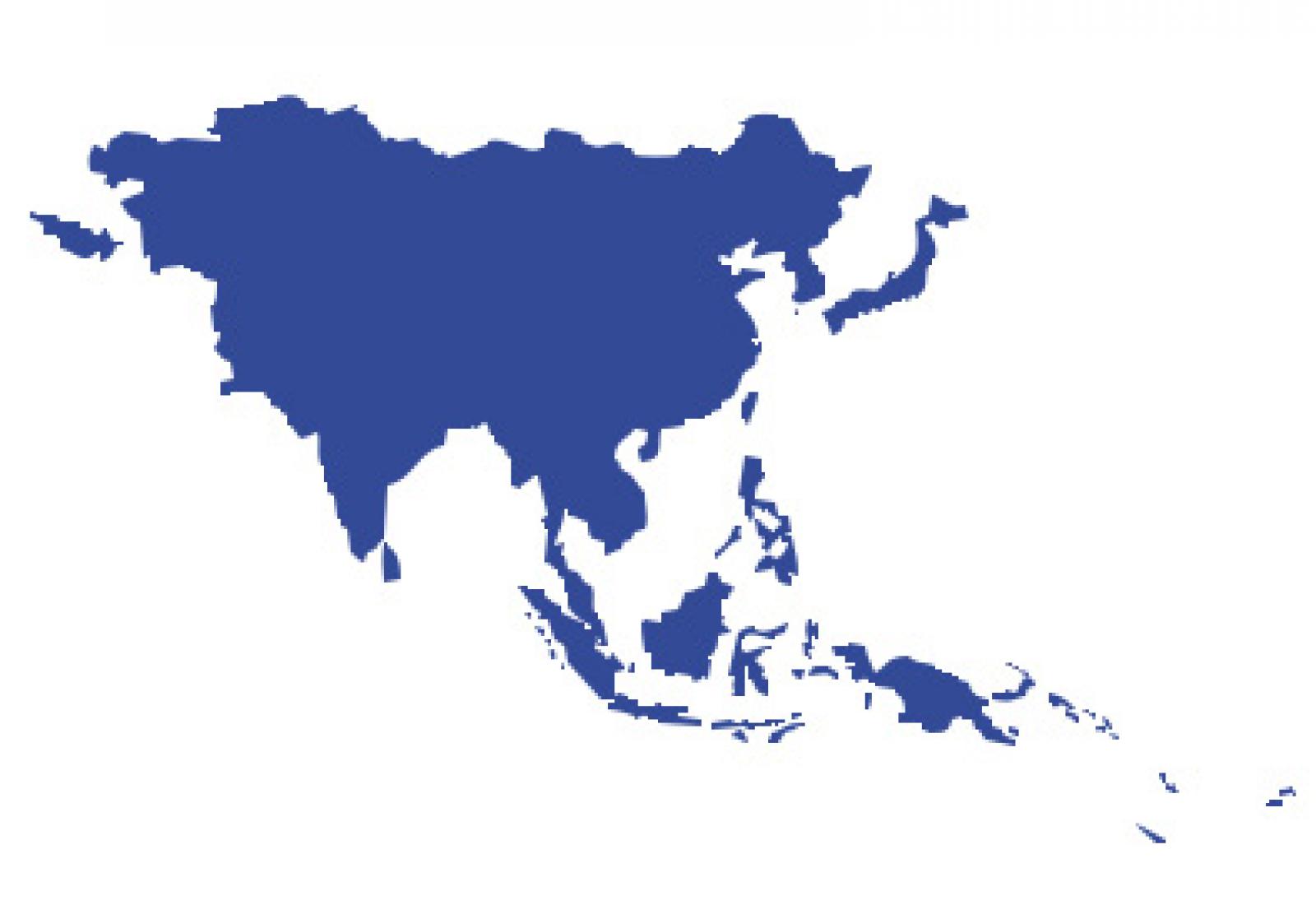 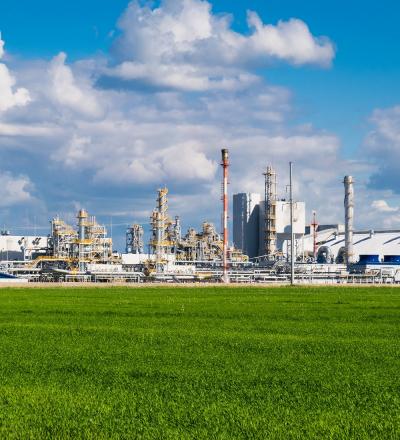 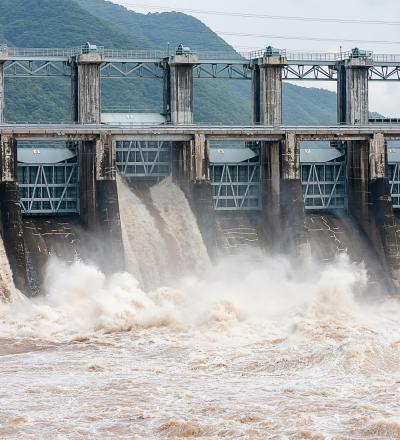